The event itself is created every 2 years in the Brussels Main Square since its inception in 1971.  The tradition began when landscape architect E. Stautemans was inspired by smaller Flemish cities’ carpets.  The 2014 Brussels Carpet of Flowers was created as a tribute to the Turkish immigrants to Belgium.  Since the flowers are petals and plucked Begonias, the carpet only lasts for 4 days before it is taken down. It takes roughly 100 volunteers under 4 hours to assemble at a rate of 300 flowers per square meter.

While the view from ground level is a site to see, the above ground view is to die for.  We arrived in town at 6 pm and went to dinner. By 730 pm, we walked out of the restaurant; since the baby had napped most of the afternoon, it was too early to call it a night and too late to visit any indoor attractions.  We went straight to the Grand Place, which was across the street from our hotel; how I scored this little gem 4 days before the long weekend I had no idea.  The lighting at dusk was amazing and the ground level view of the buildings within the Grand Place was equally impressive. Town Hall, or Hotel de Ville, has the greatest view.  They charge 5 euro per adult and strollers are not welcome.  We received a booklet about the history of the carpet during our wait.  30 minutes to get up to the balcony sounds long but it was a slow moving walking tour of the hall as well.  Once we arrived at the balcony, people were asked to continue moving towards to the right as space became available so more people could have a chance to see.  Too many people were hanging out on the balcony, it became a real problem while carrying a 2-year-old and hugging the wall – which protrudes every few feet. In the end, we had some amazing photos and the lineup the next day was ridiculously long. Although we went to bed at a later-than-usual time, it was very worth it.  The crowds around the carpet the next morning were just as busy; it was hard to move around the square. The morning after looked (and smelled) like a frat party but holy smokes it was cleaned up quickly. We were up earlier than I would have liked – thank you munchkin, mommy doesn’t need sleep anyways – so we witnessed a few post-party bottles littering the streets. Come breakfast, everything was cleaned up, the trucks were out of the center and all was back to normal. Amazing.

Being our first overnight trip since arriving in Germany and we couldn’t have asked for a more impressive welcome. While the crowds in the rest of the city were something to be desired, we were given a great first impression as to what more vacations at top European events were going to look like.

Top 10 things to do in Brussels

Top 10 Things to do in Ghent, Belgium with kids 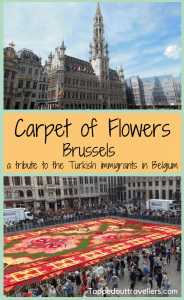 Previous Post: « How to Make Travel Affordable, as an Expat
Next Post: Admitting to legally using cannabis in Canada can get you banned from the U.S for life »