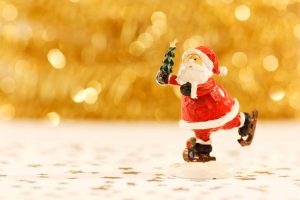 Where did the myth of Santa Claus come from?

I was going through my Facebook this morning when I found a wonderful question, asked by an international mom to the toddler group of the area. She wanted to know if Santa Claus and Saint Nicholas were two different people? Where did father Christmas originate from? and What is the real name of Santa Claus?

Being in such a diverse city, even my son’s small class of 15 children have a fair number of different cultures, ethnicities, and nationalities. The last thing I want to hear during school pick up is that one kid told another that Santa isn’t real because they believe in something else, and vice versa. I demand that my children be both culturally sensitive and knowledgeable. In order to do this, however, I first need to be educated in the various cultures that he will run into in order to properly explain them to him before he says something he can’t take back. He also needs to be prepared for someone else to say something about his culture, and he needs to know how to deal with it properly.

Which one is the real Santa Claus?

Being part of an International Community I wondered where all the different  ‘December Gift Bringers’ descend from and how they are connected to each other, and how do they influence Christmas traditions in different countries? Also, from whom did the tradition of giving gifts come from?

The oldest of December Giftbringers is Odin (or Wodan), the pre-Christian Germanic major god. Around December Odin would lead a “Wild Hunt” through the sky on his flying white horse called Sleipnir. His two ravens “Huggin & Muninn” would listen at the chimney, to tell Wodan about the good and bad behaviors of the mortals. Children would place their boots or clogs at the fireplace, filled with carrots, straw or sugar for the horse. Odin would reward this by replacing the gifts with candy. 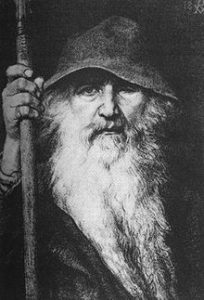 Saint Nicholas was the Catholic bishop of Myra in Turkey in the 4th Century. He was famous for his generous gifts to the poor. One of the stories tells about St Nicholas throwing coins through the window of a house, preventing the three daughters to become prostitutes in order to keep the family from starving. His birthday on December 6 was being celebrated throughout Europe ever since by giving presents to children. During the Christianization, the pagan traditions connected to the Odin rituals, such as the horse on the roof and the placing of the shoes, were incorporated in the Saint Nicholas rituals. Saint Nicholas as a gift bringer is traditionally accompanied by a contrasting character. This ‘dark’ and threatening companion figure has different appearances and names in different cultures throughout Europe: Knecht Ruprecht, Krampus, Klaubauf,  Bartle, Pelznickel, Schmutzli, Beelzebub, Hans Muff, Drapp or Zwarte Piet. Saint Nicholas has many similarities in appearance with Odin, like the white beard and white horse. He would also reward good and punish bad behavior. Instead of a black raven, he has a dark human helper listening by the chimneys.

Because half of Saint Nicholas’ remains are buried in Spain, many cultures include Spain in their traditions where the Saint is involved.

Father Christmas appeared for the first time in 17th century England. He typified the spirit of good cheer at Christmas, ut was neither a gift-bringer nor particularly associated with children. Father Christmas is identified with the old belief in the god Woden (aka Odin or Wodan) and is portrayed as a bearded man dressed in a long green fur-lined robe. The Ghost of Christmas Present in Dickens novel “A Christmas Carol” from 1843 closely resembles Father Christmas.

At the reformation that took place in 16th century Europe, the Protestants changed the unwanted Roman-Catholic Saint Nicholas into the new gift bringer Christ Child or Christkindl (Kriss Kringle), who was specially made up for this purpose. The Christ Child is an angel-like being with blond hair, sometimes portrayed as an infant or a young child, bearing little resemblance to the infant of Bethlehem. In contrast to other gift bringers, the Christ Child is never to be seen by children. Because the Protestants did not want to celebrate a Catholic Bishop’s birthday, at this point in history the date of gift-giving changed from December 6 to Christmas Eve, the former pagan ‘turn of the light’ celebration.  In America, the pronunciation and spelling of the “Christkindl” were later changed into “Kris Kringle”. 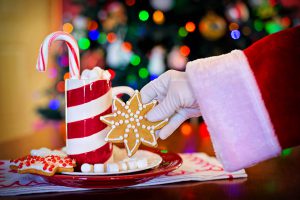 Sinterklaas (or Sint Nikolaas) being the Dutch translation for Saint Nicholas, much of the history has remained the same, only the traditions involved in celebrating the Saint from such a distance has changed over the years.

Mid-November (the first Saturday after November 11), Sinterklaas arrives on Steamboat to a different Dutch harbour, sailing from Spain. He parades throughout the country either by ship or Horse and Buggy until December 5, Saint Nicholas’ Day.

The controversial Zwarte Piet (Black Peter) has long been a tradition in the Netherlands for being Sinterklaas’s helper in delivering gifts. His story has taken many changes over the years; starting out as Ravens during the WildHunt of Odin, warning him of the good or bad children in the house; later in Germanic-Europe as an enslaved devil, forced to help deliver presents; in an 1850 Children’s book, he was introduced for the first time as an African slave; finally, in the 20th century he was re-imagined again into a Spanish chimney sweep. Due to growing international social standards, there have been numerous protests regarding servants in Black-face, and this year will be the first time Black-Peter will be banned in the Amsterdam parade. He is being replaced by Sooted-Peter, an obviously dirty White man in costume, more in line with the Chimney-sweep version of the tale.

European and English emigrants took Saint Nicholas, Father Christmas, and the Christkindl with them to America. In the late 18th century these were merged into the character of “Santa Claus”. Early depictions of Santa Claus had the appearance and good spirit of Father Christmas but was a gift bringer like Saint Nicholas and the Christ Child. The name “Santa Claus” is obviously a derivative of “Sinterklaas”, the Dutch name for Saint Nicholas. In 1823 the poem “The night before Christmas” was published in a New York newspaper. Santa Claus’ difference in appearance from Saint Nicholas was established here. Due to lack of other explanation, the poem is arguably the basis of Santa’s sleigh and reindeer.

In those days, the American Santa Claus still looked a lot like the English Father Christmas. Green fur-lined robe, grey/brown beard, no hat, but a wreath of holly on his head.  This also explains why is Santa Claus red; the modern-day image of Santa Claus in his typical red and white outfit the world owes to a 1930’s advertising campaign by Coca-Cola. When establishing Santa’s look as we know it today, with his pointy hat, and boots, the Coke marketeers were obviously inspired by the ‘Tomte’ or ‘Nisse’, the Scandinavian gnome. Because of the similarities in appearance, Tomte or Nisse later merged with Santa and became the gift-bringer in most of Scandinavia. 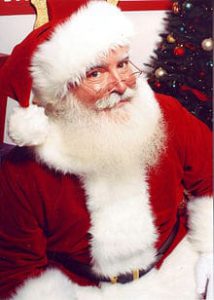 After reading up on each of these gift-bringers to verify the source’s information, it became clear(er) to me that our current traditions are in a constant state of evolution, accommodation, and reinvention. I wonder what this article will look like in 50 years, 100 years, 200 years? 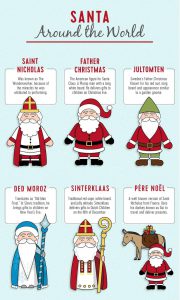 Thank you to Gifts.com for the incredible infographic.